skip to main | skip to sidebar

Ravi Singhal
Science communication is important in today's technologically advanced society. A good part of the adult community is not science savvy and lacks the background to make sense of rapidly changing technology. My blog attempts to help by publishing articles of general interest in an easy to read and understand format without using mathematics. You can contact me at ektalks@yahoo.co.uk

Overcoming the problem of antibiotic resistance bacteria - a promising development

Index of Blogs and Courses

In my post on emergence of multi-drug resistance bacteria, I had pointed out the danger of medicine as we know it returning to the pre-antibiotic era.  A promising development holds out hope of success in fighting these pathogens.
The development is due to Nobel Laureate Kary Mullis and published in the
Journal of Molecular Medicine, 2015; DOI: 10.1007/s00109-015-1280-4

This very clever idea uses pre-existing antibodies to attack and kill the pathogenic bacteria.
The way it works is to attach one end of a 'homing beacon' (or Alphamer) to the bacteria; the other end of the homing beacon is alpha-Gal, a type of sugar molecule. Humans naturally produce antibodies against alpha-Gal  because alpha-Gal is foreign to humans. Other mammals and some microbes produce it. Humans have evolved antibodies against alpha-Gal when we consume meat or are exposed to alpha-Gal-generating microbes in our environment.
The Alphamers now tell the antibodies that alpha-Gal is present and the antibodies devour the tagged pathogenic bacteria with it. If  Alphamers continue to show promise, researchers might be able to apply the same concept to attack any type of bacteria or virus, or perhaps even cancer cells.
The team says - “We’re picturing a future in which doctors have a case full of pathogen-specific Alphamers at their disposal.  They see an infected patient, identify the causative bacteria and pull out the appropriate Alphamer to instantly enlist the support of the immune system in curing the infection.” Index of Blogs and Courses

The Universe is vast and it is almost impossible to describe how big it is.

A good way to get some feel for the size of the Universe is to use the Powers of Ten method.
The idea is by looking at the objects in a square of side 1 meter. Then increase the area of observation to a square of 10 meters and see what objects are present.
In each successive step increase the side by a fact of ten and in 25 steps, one is looking at an area of side 10^25 by 10^25 meters - which contains most of the observable Universe.
One can also reduce the size of the side of the square by successive factors of 10 and look at the microscopic world.

This is most beautifully done on the website. I do hope that you will enjoy spending some time on this website - I recommend it highly.

In the following I shall publish the slides for my first talk on Exploring the Cosmos.  (Click on the slide to view its bigger image) 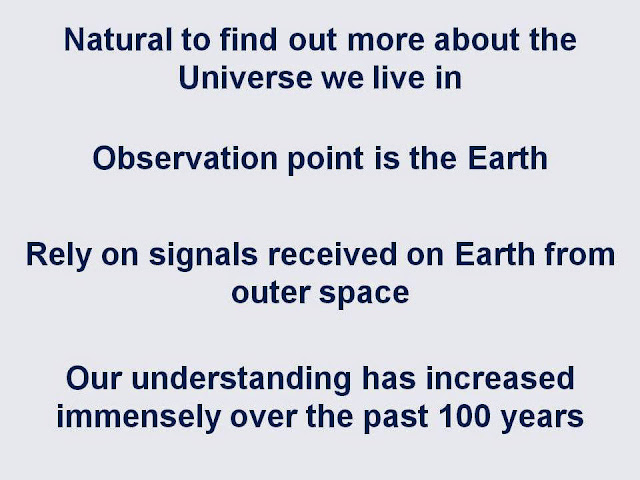 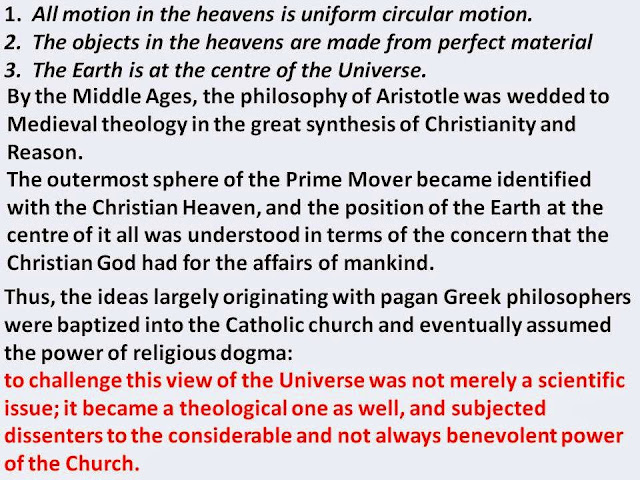 Retrograde Motion of planets:  Planets did not move in smooth circular path but looped their paths sometimes. this would be against the perfection that Aristotle's model demanded. 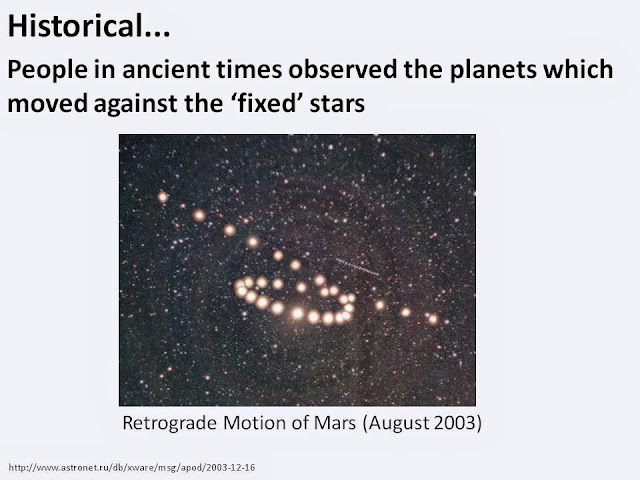 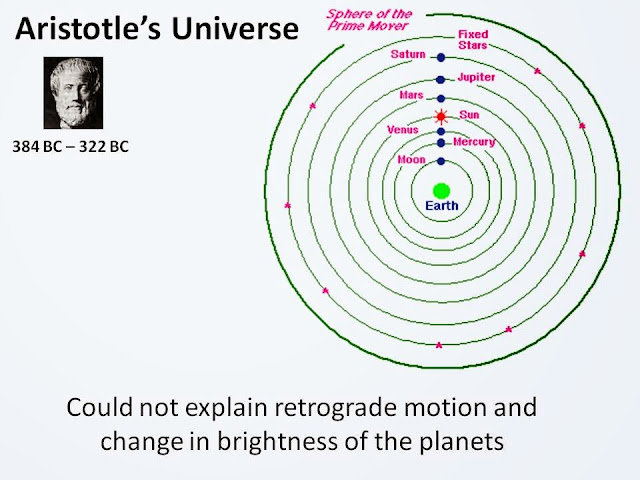 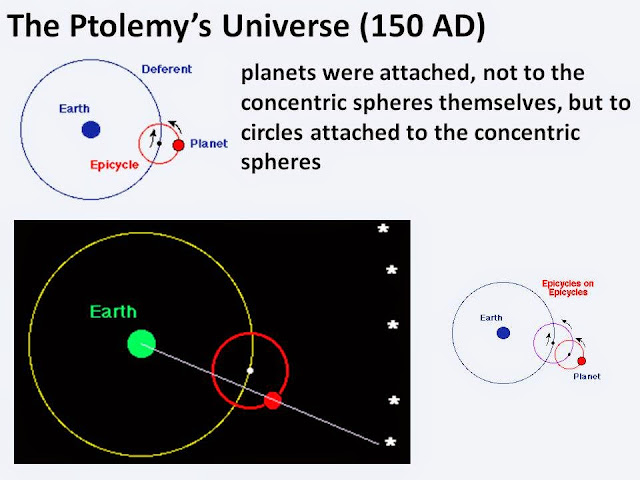 Aristotle-Ptolemy Universe held sway, with the backing from the Church for almost 2000 years. Anybody who spoke against it was severely punished. 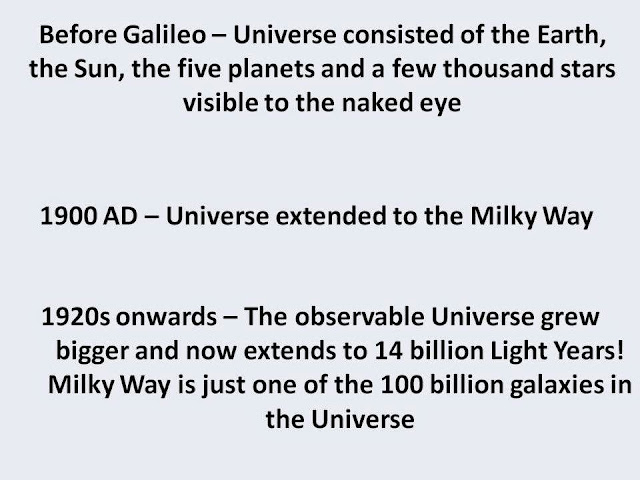 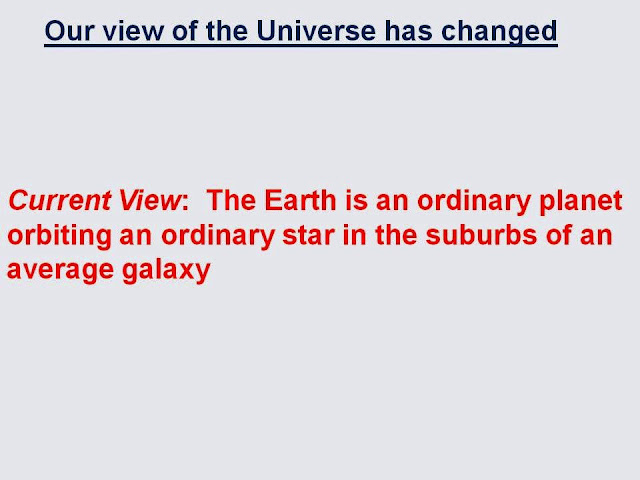 Shorthand way of writing powers of ten.  This allows big numbers to be expressed in compact form. 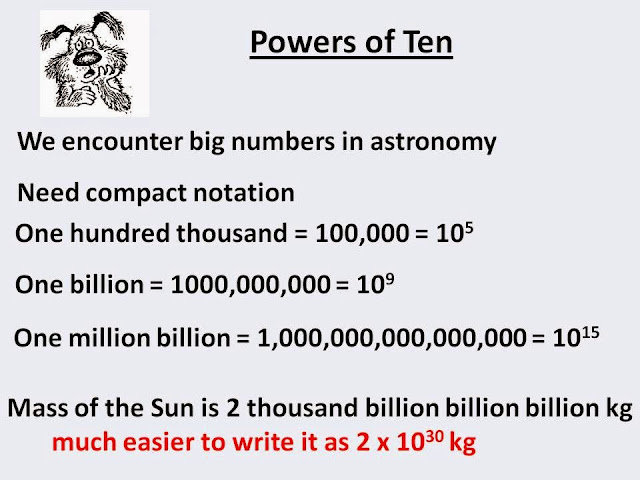 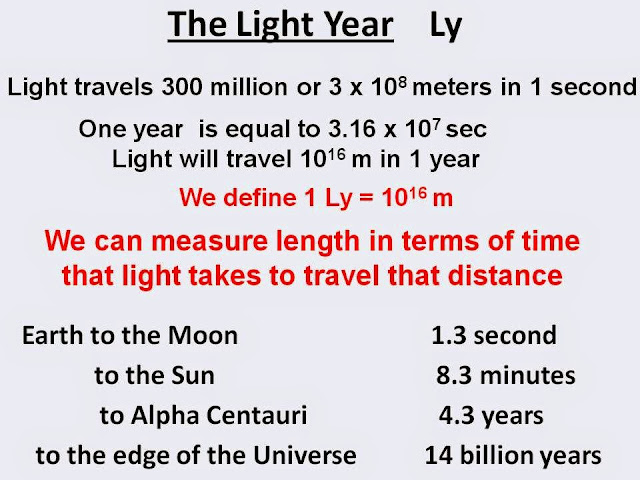 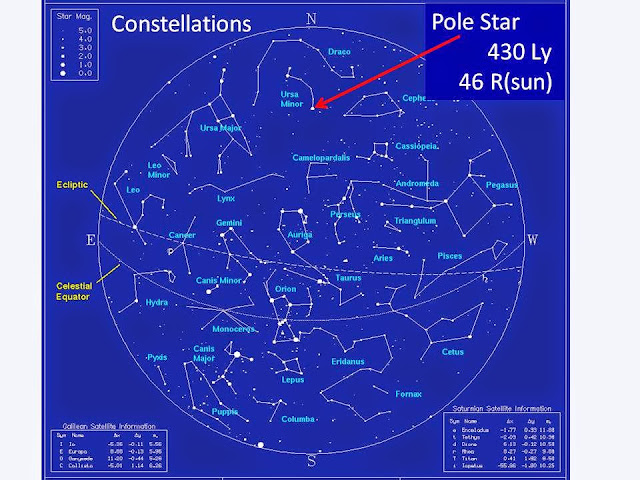 Universe has a wide variety of objects that we shall talk about in this course: 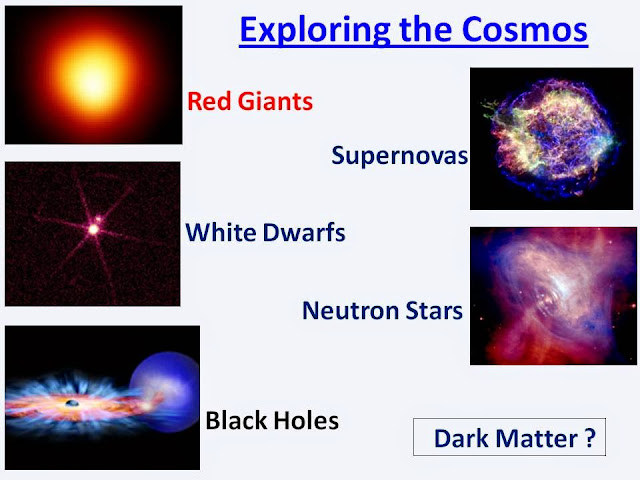 Sizes of stars vary tremendously.  The figure compares some of these: 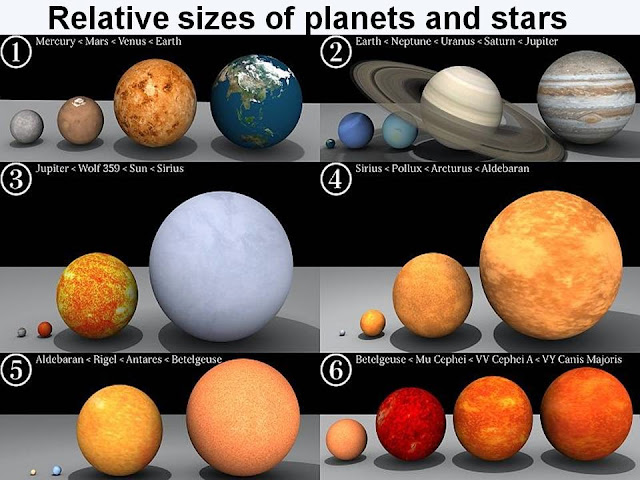 Exploring the Cosmos: How? and Why? in Science

We humans are a curious bunch - always trying to make sense of the world we live in.  And not a bad thing it is -  the never ending quest for answers to the how? and why? of everything that happens around us has put us on top of the intellectual packing order.

In distant past the basic questions would concern about nature - particularly the ever changing pattern of the heavens.  Each tribe would have its own way of making sense of the movement of the Sun, the Moon, the planets and fixed stars.  With little empirical information, most of the natural phenomena were attributed to some almighty force  - a kind of deity.

But to our credit, the how? and why? persisted and it was not long before the Greeks came up with some very clever analysis of what might be happening up above.  This was all good philosophy - unfortunately not backed by (even ignoring) much experimental evidence.  Then, organised religion got involved too! No wonder it took 2000 years to reach some sort of sanity!
From being the centre of the Universe, the Earth is now rightly considered an average planet revolving round an average star situated in the suburb of an average galaxy.

Observation based science is merely 500 years old and it is amazing the progress we have made in such a short span of time.  The Scientific Method is what we rely on to test the validity of the answers to the how? and why?

When it comes to the study of the Cosmos, one can't help to appreciate the feeling of inadequacy. Imagine, standing in George Square in Glasgow and be asked to map out the geography of Europe.  Difficult - may be impossible. Mapping the Universe is just a little more difficult!  Remember:

The Earth and its near vicinity is the only observational point available to study the vastness of the Universe.
The main source of information is the radiation sent by the heavenly bodies of which the Earth intercepts a tiny amount.

In such a hopeless situation, it is not unreasonable to make a whole lot of assumptions.  The laws of science are formulated, with a lot of axioms and faith, to explain what is happening on our planet.  We then assume that the same laws apply with equal rigidity and precision to the whole of the Universe at all times; past, present and future.  And we keep modifying our laws as well - along with them our view of the Universe!  Remember the 'Age of the Earth and the Sun Controversy' - because nuclear physics was not a mature field in the year 2000 and existing laws gave ridiculous answers.
Mix in a bit of human hubris  - Eddington refused to accept the prediction that a massive star can collapse to a white dwarf state only a thousand kilometer across forcing Chandrasekhar to leave Cambridge.  History is full of such incidences.  But then this is what makes us human and makes life not feel too dull and boring.

Even the two essential and fundamental theories  - Quantum Theory and Relativity - are not compatible with each other.  We couldn't do without either of them.  Does it mean that the laws of science as we know them might change drastically at some stage in the future?  How it will affect the current view of the Universe is something I do not even wish to think about.

Anyway, in the course of lectures that I gave to communities in Glasgow area and at the University of Strathclyde, I shall present the slides which explain what we know of the Universe just now.  No discussion of dark energy and dark matter will be found here.  The presentation is suitable for a nonspecialist - my public talks are advertised as aimed for 10 to 100 years old.  My oldest student (in 2010) is now 106!

The Universe is vast - unimaginably vast.  Try explaining to a 10 years old how far the nearest galaxy is and we soon find ourselves lost for words. It is interesting that children can ask questions that appear simple - like, how do we know the distance of a star or how do we know the temperature of a star or what elements it is made of.  Grown ups are much more reluctant to ask questions fearing that it will show their ignorance - not realising that these are pertinent questions for a non-specialist to explore.

I have always felt that adult education should be an important part of our education system - something we as a society have failed to address adequately.  The local authority education department in Lanarkshire refused to have anything to do with the science talks because they did not see these as relevant.  Government sponsored programmes like STEM in the UK will target school children but will not talk about organizing adult courses.

Scientists in general are too busy with research and teaching to pay serious attention about explaining their work and science and technology matters to the general public.  Most public lectures tend to be one off and too difficult to be of much benefit to the public. Serious thinking is needed in this direction.
Posted by Ravi Singhal at Saturday, May 02, 2015 No comments:

In my talks on Nanotechnology, I had described an artificial leaf which could efficiently mimic the photosynthesis process.

Plants use photosynthesis to convert sunlight, water and carbon dioxide to make chemicals in the form of carbohydrates. Globally, this natural process harvests 130 Terawatts of solar energy to generate up to 115 billion metric tons of biomass annually. Even if one could harness just a fraction of this amount to make fuels and power industrial processes, our reliance on fossil fuels will be drastically reduced.

Recent work has demonstrated how artificial photosynthesis could help to make useful chemicals like plastics, medicine, fuels etc entirely powered by sunlight.  One hopes that this could one day reduce industry’s dependence on fossil fuel-derived energy by powering it with solar energy and bacteria

A nano-wire array captures sunlight, and with the help of bacteria (bacteria based bio-catalysis), converts carbon dioxide into acetate.

Another kind of bacteria then transforms the acetate into chemical precursors that can be used to make a wide range of everyday products from antibiotics to paints, replacing fossil fuels and electrical power.